This week sees the 45th course for brass and wind take place in Jönköping, the picturesque city on the edge of Lake Vättern in Sweden.

There are 85 musicians from all over Sweden who are participating in three bands, which will be conducted by four conductors: Yngve Nordström, Jörgen Ådvall, Berit Palmquist and Philip Harper. As well as taking part in sectional rehearsals and full band rehearsals, course participants also have the chance to have individual lessons from one of the ten tutors in attendance, or take part in extension activities such as Big Band or Music Theory classes.

There will be a final concert at Immanuel Church in Jönköping on Saturday evening, where the bands will perform such pieces as: Connotations, Caravan, The Marriage of Figaro, Fantasy on British Sea Songs, Nicaea, The Umbrellas of Cherbourg amongst many others. 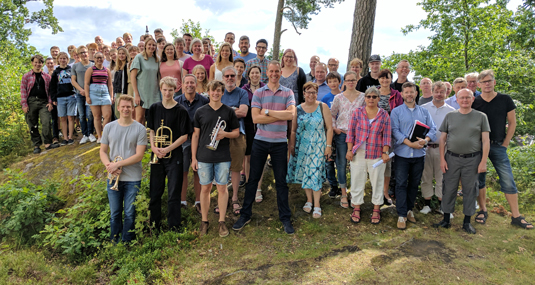 “At the midway point I can say it has so far been a fantastic week of music-making, with a unique atmosphere where young and old, experienced and less-experienced bandspeople all relish the opportunity to play and learn together. I arrived on Sunday to be met by the organiser Berit Palmquist who has everything tightly under control – she’s been running the course for the last 30 years, although I believe this particular venture began way back in 1972. Then the participants started arriving on Monday morning, we did some ‘get to know you’ sessions, and then it was straight into the routine of rehearsal, eat, rehearsal, eat etc!”

“The Swedish hospitality is as good as it always has been, and we have enjoyed some brilliant hard-working rehearsals, as well as some cosy fika, which is a uniquely Swedish term for ‘coffee and buns’. Evenings have all had an activity too, such as an excellent tutors’ concert last night, some hands-on team-building workouts, and tonight it’s my turn with a talk about building a band.”

“It’s also been very interesting to be able to conduct each of the three bands every day – two brass bands and a wind band, all with different personalities and characteristics. Considering how to get the best out of a group is one of my fascinations with conducting, so it has been very rewarding to have three groups with which to build up a rapport. I’m also looking forward to delivering some workshops and seminars to the conducting course which has begun today and will run alongside the camp, being led by Torgny Hanson. It is to the credit of the Swedish band movement that this conducting course is only one of a series of regular meetings for the participants, which offers a great opportunity to develop over a longer period with a greater level of reflection.”

“It’s always a great pleasure to come to Sweden and this week has been no exception. I’m really looking forward to the last few days and then the final performance!”