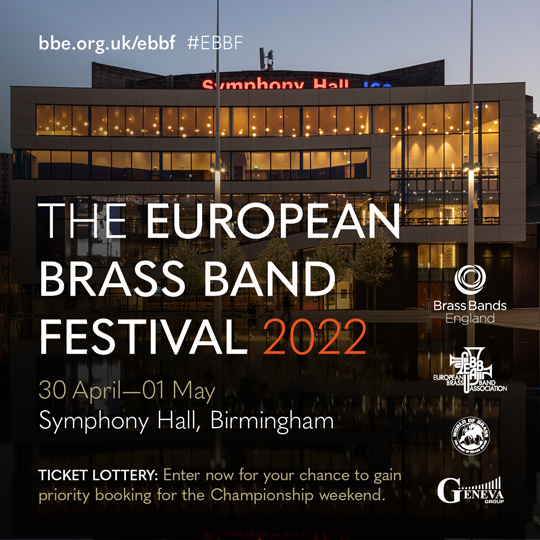 The ambitious, large-scale festival will see four days of brass banding events taking place in the city of Birmingham between 28 April and 1 May 2022 and will encompass the European Brass Band Championships in association with World of Brass.

Organised by Brass Bands England (BBE), the event will see bands from across Europe gather in a celebration of music-making which, for many, will mark a return to contesting following the pandemic-enforced break. 15 years since they were last held in England, the Championships will return alongside a host of other banding events under the banner of the wider Festival.

As well as competing bands, the programme of events will include performances from The Band of Her Majesty’s Royal Marines Collingwood, Grimethorpe Colliery Band, European Youth Brass Band and The National Youth Brass Band of Great Britain. plus a special collaboration between Cory Band and the Louis Dowdeswell Big Band. All performances will take place at Birmingham’s Symphony Hall and Town Hall.

Ulf Rosenberg, President of the European Brass Band Association, commented: “The European brass band family will be back in England for the first time since 2007 and we are looking forward immensely to what promises to be a fantastic event. Brass Bands England has assembled an outstanding programme of events and performers which, combined with the excellent facilities at Birmingham’s Town Hall and recently remodelled Symphony Hall, will guarantee a very exciting weekend of high-quality music-making. An occasion not to be missed by any lovers of our music!”

To round-off the long weekend, attendees will be welcomed to join competing bands at a closing party, with further musical entertainment from the talented Louis Dowdeswell in the fantastic facilities of the redesigned Symphony Hall concourse.

General ticket sales for all European Brass Band Festival events will open at 10am on Friday 10 December 2021 via the B:Music website https://bmusic.co.uk/whats-on

Further information on all events and the Festival as a whole can also be found at bbe.org.uk/EBBF.